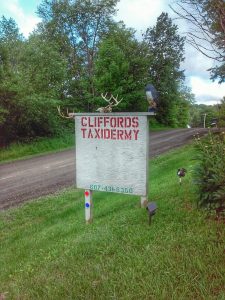 Honesty is the best policy and size really doesn’t matter. Cliffords Taxidermy is a one man operation and has been for 22 years. Cliffords work space is roughly 220 square feet. The facts are this, when you bring your trophy of a lifetime to Cliffords, your trophy will receive the utmost care and attention to detail any taxidermist can provide. Clifford’s mammal taxidermy experience ranges anywhere from a chipmunk to a black bear. Cliffords fish taxidermy ranges from a six inch bluegill all the way to forty plus inches Atlantic Ocean Striper Bass. Cliffords bird taxidermy ranges from a pigeon to a full strutting tom turkey. If you’re just looking to have an animal hide preserved by tanning it, Cliffords Taxidermy does that too.

In June 2014 your taxidermist Clifford was diagnosed with severe onset of Osteoarthritis in both knee’s. It was not until late 2017 early 2018 when things began to go down hill for Clifford rapidly but it was not until spring of 2019 before his doctors realized it had taken over his whole body. Clifford’s Orthopedic surgeons began to question the rapid rate of deterioration and ordered further testing. By early fall 2019 with help of the Mayo Clinic it was determined and confirmed that Clifford suffered from a massive 20 year old brain tumor which was removed in early 2020. you can read more of the brain tumor story HERE

In February 2021 Clifford received reconstruction of total left hip replacement. In late May 2021 just 12 weeks after his first surgery of the year, Clifford underwent reconstruction of total left right replacement. Both surgeries where successful and has resulted in a brighter future for Cliffords Taxidermy. We are very optimistic that we will return to being fully operational by fall 2021.

This site uses Akismet to reduce spam. Learn how your comment data is processed.