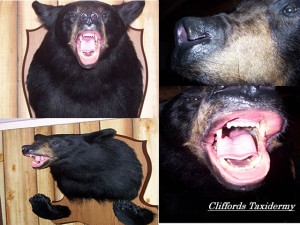 We do black bear head mounts here at Cliffords Taxidermy. Black bear taxidermy is one of our favorite types of taxidermy to do. Early bear season in New York both in the southern and northern tier begins in September which officially kicks off the New York state big game hunting season.

Mounting a black bear is not the same as mounting a whitetail. Black bears are notorious for be very greasy and require a totally different technique when it comes to tanning the cape. Although the same mounting principles applies to both deer and bear, it all boils down to cape preparation. Most taxidermists cannot handle the cleaning and tanning of a black bear cape and will argue the fact, that tanning a black bear cape is not in a taxidermists best interest. For this reason 99% of bear capes get sent out to a tannery. At Clifford’s Taxidermy, we find that totally unacceptable. Like our deer capes, all bear capes are tanned on site professionally. We have the skill and knowledge when it comes to tanning greasy animals such as beaver and bear. Furthermore by tanning capes on site, we can make sure it is your cape that gets mounted, not the next guys cape.

This site uses Akismet to reduce spam. Learn how your comment data is processed.